The Theatre program at Little Rock Christian is a phenomenal experience for both the student and audience. From the smaller beginning venue offered through the Fine Arts Academy, to the experience of performing for hundreds in Warrior Hall, theatre studies at LRCA include a variety of genre meant to give a well rounded exposure for each student.

When involved in this program, students will learn about all aspects of theatre from acting, design, theatre history, directing and so much more. Through this department we hope to see students grow in their confidence and abilities as they gain much needed 21st century skills like creativity, communication, collaboration, critical thinking and college and career readiness.

Beginning Theatre offers students an opportunity to learn about a variety of elements related to acting and the theatre.  Students not only study acting and design, but they will also learn to look at plays critically.  Beginning 6 Theatre provides a great place for students to learn new things, discover unknown elements of their personalities, and hone skills and abilities related to this field.  It is also a place where students can work on overcoming shyness and gain confidence as they learn to interact and encourage others by studying and performing in a variety of genres.

Junior High Theatre offers students an opportunity to learn about a variety of elements related to acting and the theatre.  Students study acting and design and also learn to look at plays critically.  Some of the activities include writing and performing original pieces, learning monologues, and basic set design.  Junior High Theatre provides a great place for students to learn new things, discover unknown elements of their personalities, and hone skills and abilities related to this field.  It is also a place where students can work on overcoming shyness and gain confidence as they learn to interact and encourage others by studying and performing in a variety of genres.  Students are required to attend the LRCA high school productions.

Junior High Technical Theatre offers students the opportunity to learn all things theatre that go on behind the scenes.  Students will study a variety of technical aspects from lighting and sound to set design and costuming.  Junior High Technical Theatre is a great place for students to learn new things, discover new technology as well as hone skills related to this field.  It is also a great way to gain experience that can be used in our schools major productions.

Theatre Appreciation is a one-semester course in which students develop fundamental theatre skills through academic study, hands-on experience, and projects. Students develop an understanding of basic theatre skills and the history of theatre; analyze and evaluate artistic work; and discover connections between theatrical works and societal, cultural, and historical contexts.

Technical theatre is a one-semester course designed for the students interested in the non-performance side of theatre. The class will focus both on design and construction in several areas. Units include set design, set construction and painting, lighting design, hang and focus, costume design and construction, and stage makeup. Some after school and evening work is required. As part of the class, students will serve on the technical crew for the fall production. This course will allow each student to choose an area of specialization and work on a higher level.

This course is designed to give the performer the essential training in various dance techniques, an understanding of the structure behind stage choreography, and an insight into the necessary showmanship and performance of that choreography. Students will explore various dance styles (tap, jazz, ballet, modern) through technical training and explore their historical context and artistic impact on the musical theatre genre.

Designed for the serious theatre student, Directing and Production develops skills in directing and play production. Students have the opportunity to learn about the art of directing, and they have the opportunity to direct and produce. Students develop confidence in their theatrical vision and problem solving skills as they learn to work with actors and technicians to create beautiful works of art.

Designed for the serious theatre student, Directing and Production develops skills in directing and play production. Students have the opportunity to learn about the art of directing, and they have the opportunity to direct and produce. Students develop confidence in their theatrical vision and problem solving skills as they learn to work with actors and technicians to create beautiful works of art.

Musical theatre is a form of theatrical performance combining song, spoken dialogue, acting, and dance. This course focuses on each of these components in the classroom setting, leading up to the spring musical production in April 2021. In addition, the course examines various aspects of famous performances in American musical theatre. Students have the opportunity for regional competition and performance.

This class offers training and hands-on application of current professional audio, video and production technology. Training in digital sound, stage and broadcast lighting, HD video and Adobe Creative Suite will enable the student to run productions campus-wide, including any Warrior Hall event (chapel, concerts, etc.), live streaming (on and off campus), and video production (pre and post). Classroom time will be split between training and live production. Homework will be minimal; however, there is an expectation of participation in a select number of after school events.

The International Thespian Society (ITS) is the Educational Theatre Association’s student honorary organization. ITS recognizes the achievements of high school and middle school theatre students. Since 1929, EdTA has inducted more than 2 million Thespians into ITS.

The goals of the LRCA Thespian Troupe:

We are looking forward to Summer Camp 2023!

Little Rock Christian’s two-week musical theatre camp concludes with a main stage production. Students will be part of a fantastic theatrical experience which includes a full 60-minute musical with sets, costumes, choreography, and fully memorized script and music! Participants will be involved with set building, costumes, makeup, choreography, and may additionally participate as stagehands and assistant stage managers.

Charlie Brown and the entire Peanuts gang explore life's great questions as they play baseball, struggle with homework, sing songs, swoon over their crushes, and celebrate the joy of friendship.

Based on the heartwarming film, "Meet Me in St. Louis" is a rare treasure in musical theatre - a wholesome and delightful portrait of a turn-of-the-century American family. It is the summer of 1903, and the Smith family eagerly anticipates the opening of the 1904 World’s Fair. Over the course of a year, the family’s mutual respect, tempered with good-natured humor, helps them through romance, opportunity, and heartbreaks. Memorable musical numbers include “Have Yourself a Merry Little Christmas,” “The Boy Next Door,” “The Trolley Song,” and “Whenever I’m with You.”

"The Sound of Music" is heartwarming love story based upon the memoirs of Maria von Trapp. When postulant Maria proves too high-spirited for the religious life, she is dispatched to serve as a governess for the seven children of a widowed naval Captain. Her growing rapport with the youngsters, coupled with her generosity of spirit, gradually captures the heart of the stern and emotionally hardened Captain. Then Austria is invaded by the Nazis, and the family makes a narrow escape over the mountains to Switzerland on the eve of World War II. The score includes such audience favorites as "My Favorite Things," "Do, Re, Mi," "Edelweiss," "So Long, Farewell" and the title song.

Join Little Rock Christian as we go “Under the Sea” for a spectacular production of the Broadway musical, Disney’s The Little Mermaid!

Headstrong Ariel is no longer content to live on the ocean floor under her father, King Triton’s rule. Convinced she’ll only find happiness on land, she sets off to find a world where she belongs, battling a cruel sea witch and finding true love along the way. Adults and children alike will revel in the Academy Award®-winning hits by the legendary Alan Menken including “Kiss the Girl” and “Part of Your World.”

This spectacular production will feature dazzling costumes, a stunning set and visual effects that are pure magic. Come this spring, get ready to trade in your winter fleece for flippers and make Disney’s The Little Mermaid part of your world. 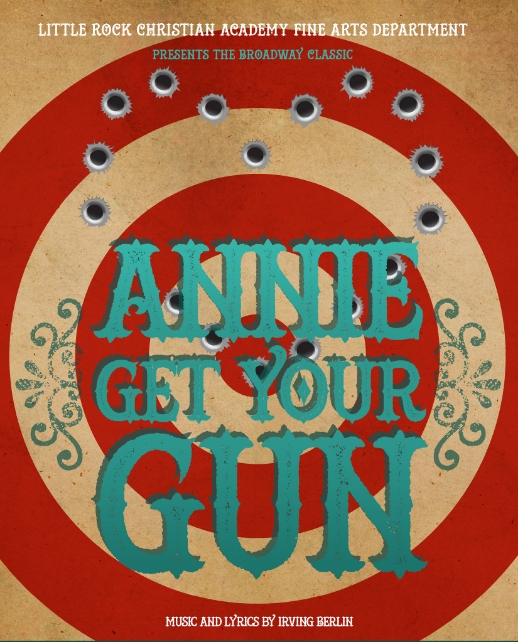 Annie Oakley is the best shot around, and she manages to support her little brother and sisters by selling the game she hunts. When she's discovered by Col. Buffalo Bill, he persuades this novel sharpshooter to join his Wild West Show. It only takes one glance for her to fall head over heels for dashing shooting ace Frank Butler, who headlines the show. She soon eclipses Butler as the main attraction which, while good for business, is bad for romance. Butler hightails it off to join a rival show, his bruised male ego leading the way, but is ultimately pitted against Annie in a final shoot-out!

In Sorry Wrong Number, Leona Stevenson is an alluring, wealthy, and irritating hypochondriac whose psychosomatic illness has her bedridden. Leona's only lifeline is the telephone, which she uses to excess. One evening, Leona impatiently tries to locate her henpecked husband Henry who is late in coming home. However, when phone lines cross, she overhears two thugs plotting a murder. Desperate to thwart the crime, Leona begins a series of calls--to the operator, to the police, and others--and eventually deduces the shocking identity of the victim.

The Importance of Being Earnest is the most renowned of Oscar Wilde’s comedies. It’s the story of two bachelors, John ‘Jack’ Worthing and Algernon ‘Algy’ Moncrieff, who create alter egos named Ernest to escape their tiresome lives. They attempt to win the hearts of two women who, conveniently, claim to only love men called Ernest. The pair struggle to keep up with their own stories and become tangled in a tale of deception, disguise and misadventure. The elaborate plot ridicules Victorian sensibilities with some of the best loved, and indeed bizarre, characters to be found on the modern stage.

On a hot summer day after a long trial, a jury must decide whether a 19-year-old man is guilty of murdering his father. The jury votes 11-1 that the man is guilty of the crime, but laws in the United States require a unanimous vote by all 12 jurors in order to pass judgment. Tempers flare as the eleven jurors try their best to convince the 1 dissenter to come around to their side. As the evidence is re-examined, however, new uncertainties come to light, forcing everyone to truly question if there is in fact some measure of "reasonable doubt".

Twelve Angry Jurors is a heightened courtroom thriller that puts you on the edge of your seat while powerfully exploring what it means to live in a democracy.